This guide aims to document a WireGuard configuration on Ubiquiti (Unifi and EdgeOS) hardware to send all traffic from a given WiFi network through a VPN. WireGuard itself has been much-hyped and documented elsewhere; the short story is that it’s a simple-to-configure VPN designed to use modern cryptography and fast. On a 100Mb connection, I’m getting speeds of around 85Mb through the VPN. 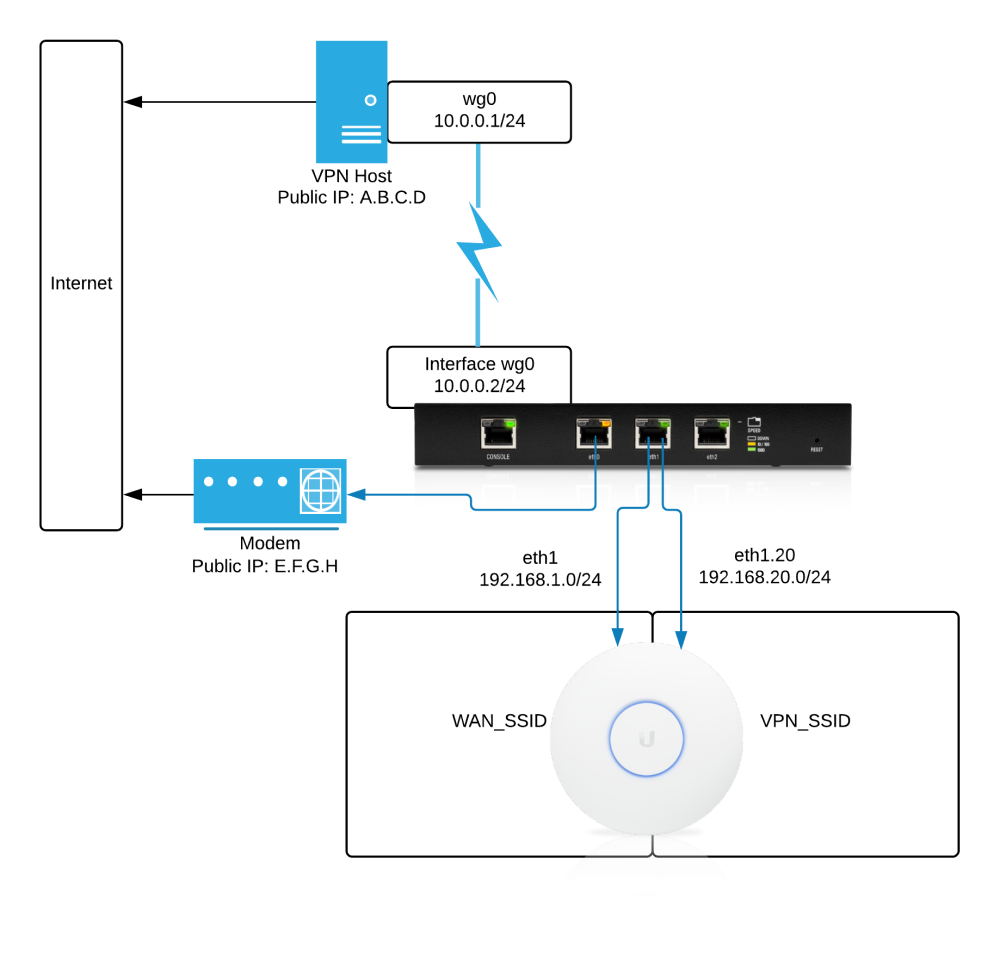 WireGuard is still poorly supported on Windows, however. There are third-party clients, but (as of writing) these have not been audited and the WireGuard authors caution against their use. It’s also meant for use as a point-to-point VPN, so each device would need its own key and client software.

Configuring it at the router level means there’s only one client to set up, and then any device can easily connect and take advantage of the VPN. Based on the diagram above, any clients connected to VPN_SSID should route through the tunnel and come out of external IP A.B.C.D; any on WAN_SSID should go straight out through E.F.G.H.

There are various other guides for configuring WireGuard on EdgeRouters, and a very active thread on the Ubiquiti forums. Most writeups seem to be router-to-router or aimed at configuring the router as a VPN server to remotely access devices on the home network. There are a couple that describe sending traffic on a home network through a commercial VPN service (eg Mullvad) but so far I haven’t seen a comprehensive guide on how to roll your own VPN and selectively send certain hosts through it. The information’s probably all out there, but hopefully I can bring it all together.

This guide will document the following:

I’m assuming at this point you already have a basic working Edgerouter configuration and that you’re able to access its CLI. You should also have a working UniFi controller. On the server side, these steps will specifically apply to Ubuntu/Debian as that’s what I’m familiar/comfortable with. The general process should be similar for any other distribution but I can’t speak to specific steps.

Setting up the Tunnel

WireGuard isn’t packaged in the default Ubuntu repos, so add their PPA first:

Hit enter at the prompt, then install:

The package should have created an /etc/wireguard folder. The next steps will be easier as root, so su up:

This should have created two files, priv.key and pub.key. The private key should be readable only by root.

Edit wg0.conf and fill it as follows:

Save and exit. There’s some more configuration needed to get both ends talking; we’ll come back to this after…

The Edgerouter filesystem is mostly wiped on firmware update, except for /config. We’ll put files here, and they’ll be maintained across updates.

Go to the vyatta-wireguard GitHub page, identify which version you need, and download the latest .deb to your router:

cd to /config/auth and generate a keypair for the router:

Back to the server for a moment to grab its public key. On your VPS, run:

Now on the router, type configure to get into configuration mode. Do the following, adjusted as needed for your network. Substitute your public key from the server in the two peer lines.

This does the following:

Back to the server to finish configuration. Edit the /etc/wireguard/wg0.conf you created earlier, to add a peer section for the router.

Now get WireGuard running as an automatic service, using the wg-quick systemd unit:

At this point there should be a working WireGuard connection between router and server. You can check with wg show:

Note: The connection isn’t brought up until either side tries to use it, so endpoint/latest handshake/transfer may not show up immediately. Send some pings through to verify they’re talking:

Setting up the LAN

At this point we’ve got two VPN endpoints talking to each other, but traffic is still going straight out to the internet through the router. We need to do some configuration on the router to start directing clients over the VPN.

I’ve chosen to put all of my VPN clients on VLAN 20; any number will work but you need to stay consistent within your LAN. Let’s start tagging at the access point first, then deal with router interfaces later.

First, create a new WiFi network. I’ll call mine VPN; name yours whatever you want. Choose reasonable security settings and a good password. What’s important here is that under Advanced Options, you check “Use VLAN” and pick a VLAN. Again, any number (except 1) will work. 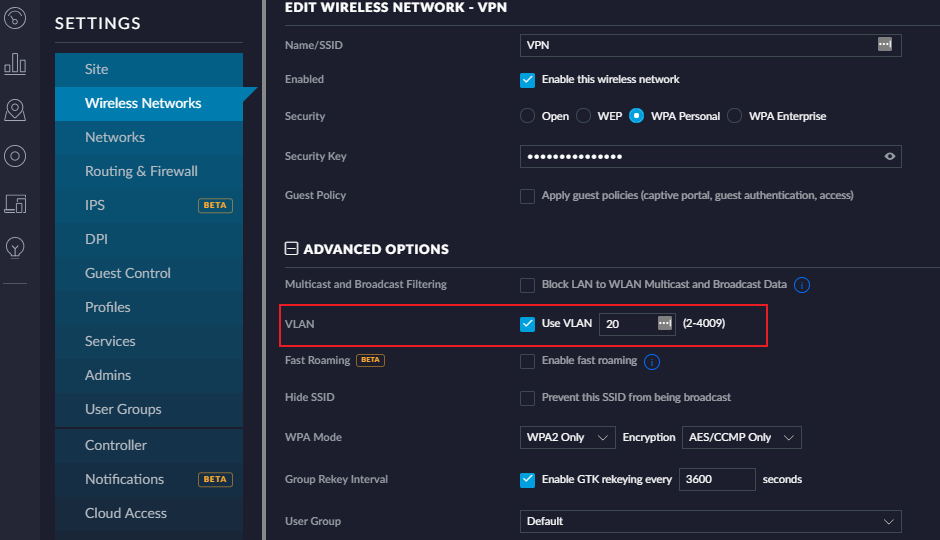 Next, add a corresponding Network. Most of the defaults are fine. Just make sure you use the same VLAN you just associated with the WiFi network. I’ve used 192.168.20.1 as my gateway, with a /24 subnet - this is up to you, but remember it in a few minutes when you’re setting up the router. 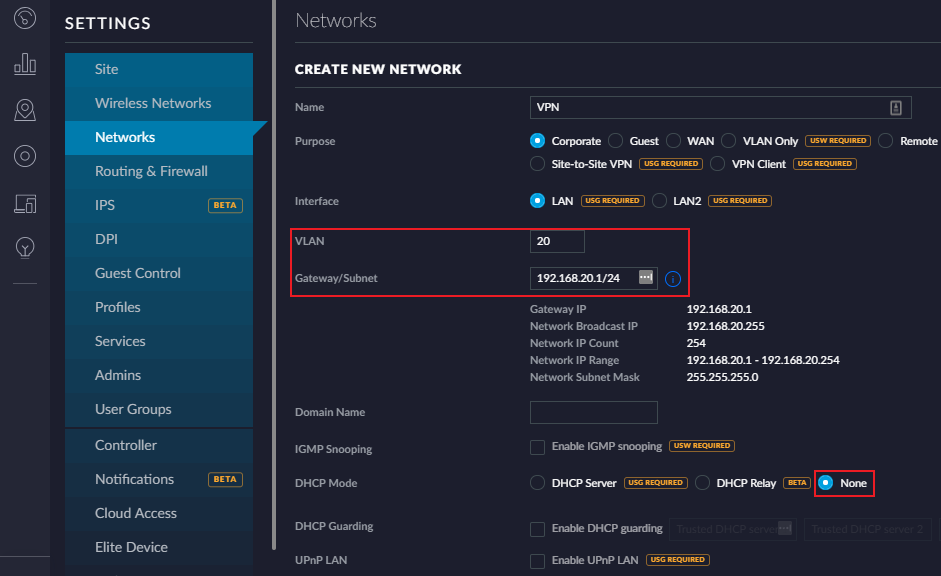 There needs to be a matching VLAN on the router, so add the following to whichever port your access point is plugged into (mine’s on eth1). The address and subnet should match what you configured on the access point.

At this point, any device with an IP in 192.168.20.x should be able to access the internet, but it won’t be traveling over the VPN just yet.

I’ve chosen to use DHCP for local addressing as I’m not running anything critical and don’t care to assign IPs. My DHCP configuration for the VPN network is as follows:

Setting up the route

Create a routing table to deal with packets destined for the VPN. The table number can be anything; I’ve chosen 20 for consistency’s sake.

This takes any packets caught by that firewall rule and, for any destination (0.0.0.0/0), sends them over wg0. The blackhole line prevents traffic from falling back to the default route (out through the cable modem) in case the tunnel is unavailable.

Next create a firewall rule to modify incoming packets with the table we just created. The source address should be the subnet you’ve already configured.

Add the firewall rule to the virtual interface. After this, traffic on the VPN SSID should stop completely.

Set up a NAT masquerade for the VPN:

Finally, do the following. I ran into an issue where some (not all, and not always) pages would hang on “Establishing secure connection” and either load slowly or not at all. I suspect this is an issue with path MTU discovery. It hasn’t been a problem since applying this fix on the router:

By default, IP forwarding isn’t enabled on the server. In /etc/sysctl.conf, uncomment the line #net.ipv4.ip_forward=1. This will be persistent.

Add the following rules to the firewall (“accept related/established” may already be there). Pay attention to the outbound interface, it’s likely either eth0 or ens3.

If you’re using UFW these can go in /etc/ufw/before.rules where appropriate.

At this point it’s probably not a bad idea to reboot your server and router. Once they’re both back up, everything should be working. Connect to the network you set up and check https://www.whatismyip.com/ to verify traffic is going through the tunnel.

That should be it. Enjoy!